How To Watch Fate Anime

Few intellectual properties epitomize the term “multimedia franchise” as completely as the “Fate” series. Originally beginning as an adult visual novel, “Fate/Stay Night,” created by the developer Type-Moon in 2004, the franchise has expanded into everything from light novels and manga to fighting games, mobile RPGs, and many different anime series. Of course, the growing popularity of anime worldwide has led to some “Fate” anime becoming some of the most popular entries in the entire franchise. This includes “Fate/Stay Night,” “Fate/Stay Night: Unlimited Blade Works,” the “Heaven’s Feel” films, “Fate/kaleid liner Prisma Illya,” “Fate/Zero,” and the many other anime that exist within the “Fate” franchise’s growing bubble of media.

Though many of these shows don’t always share the same characters or continuity, the series is broadly tied together by events known as “The Holy Grail Wars,” wherein people known as Masters summon characters called Servants to duke it out for possession of the Holy Grail . It can be a dense and confusing web of shows and plotlines to juggle, yet there is some value in parsing out such a maze of media. For those brave souls who are determined to tread such waters, here is where you can watch every episode of the “Fate” series.

Is Fate Available To Watch On Netflix

Netflix currently streams six out of ten Fate series, with many of these titles available globally. If you are unable to view them on Netflix, simply use a VPN. How to Watch Fate Series on Netflix using VPN?

Follow these four simple steps to watch the Fate Anime series on Netflix with a VPN:

I do understand why modern fans might choose to start their journey into the Fate series with Zero instead of stay night. After all, the latter looks bad, sounds even worse, and doesnt even function as a proper adaptation: advocating something like that sure is a surefire way to turn off people from watching the series before theyve even truly begun!

With this in mind, I propose this third, Machete order as a compromise. Just like the popular way to experience the original Star Wars saga , it combines the best of both new and old, while also delivering an interesting enough story despite the inherent setbacks.

We start with Fate/stay night: Unlimited Blade Works season one. While the focus on Rin means that Sabers absence is still sorely felt, the nearly fifty-minute prologue does a good job of getting the first-time viewer up to speed where it counts. Theres also enough exposition and explanation in the series to make sure that basic things such as the Servant/Master system is properly explained.

Unfortunately, this guide hasnt discussed Heavens Feel that much, but thats because it is the most straightforward adaptation. There are some changes made here and there but it is faithful for the most part, meaning that it doesnt really require that much explanation.

Shirou Emiya is a young wizard enrolled in Fuyuki Citys Homurahara Academy. After cleaning his schools Archery Dojo, he witnesses a struggle between superhuman beings and becomes engaged in the Holy Grail War, a rite in which magicians are known as Masters battle it out with their Servants to win the Holy Grail.

Shirou joins the fight to prevent an evildoer from obtaining the Grail and to protect innocent people, but everything goes awry when a mysterious Shadow starts murdering individuals in Fuyuki on an indiscriminate basis.

Shirou Emiya, an inexperienced magician, has been drawn into the Fifth Holy Grail War, a battle to the death between seven mages and their Servants, familiars who are renowned historical figures. Shirou is determined to win the Holy Grail Conflict to rescue the world and be a hero of justice, while also protecting his companion Sakura Matou from the war and her violent brother, Shinji Matou, with the assistance of his Servant, Saber, and classmate, Rin Tohsaka. Strange events begin to occur throughout the battle, and Sakura becomes ill with an unknown illness. 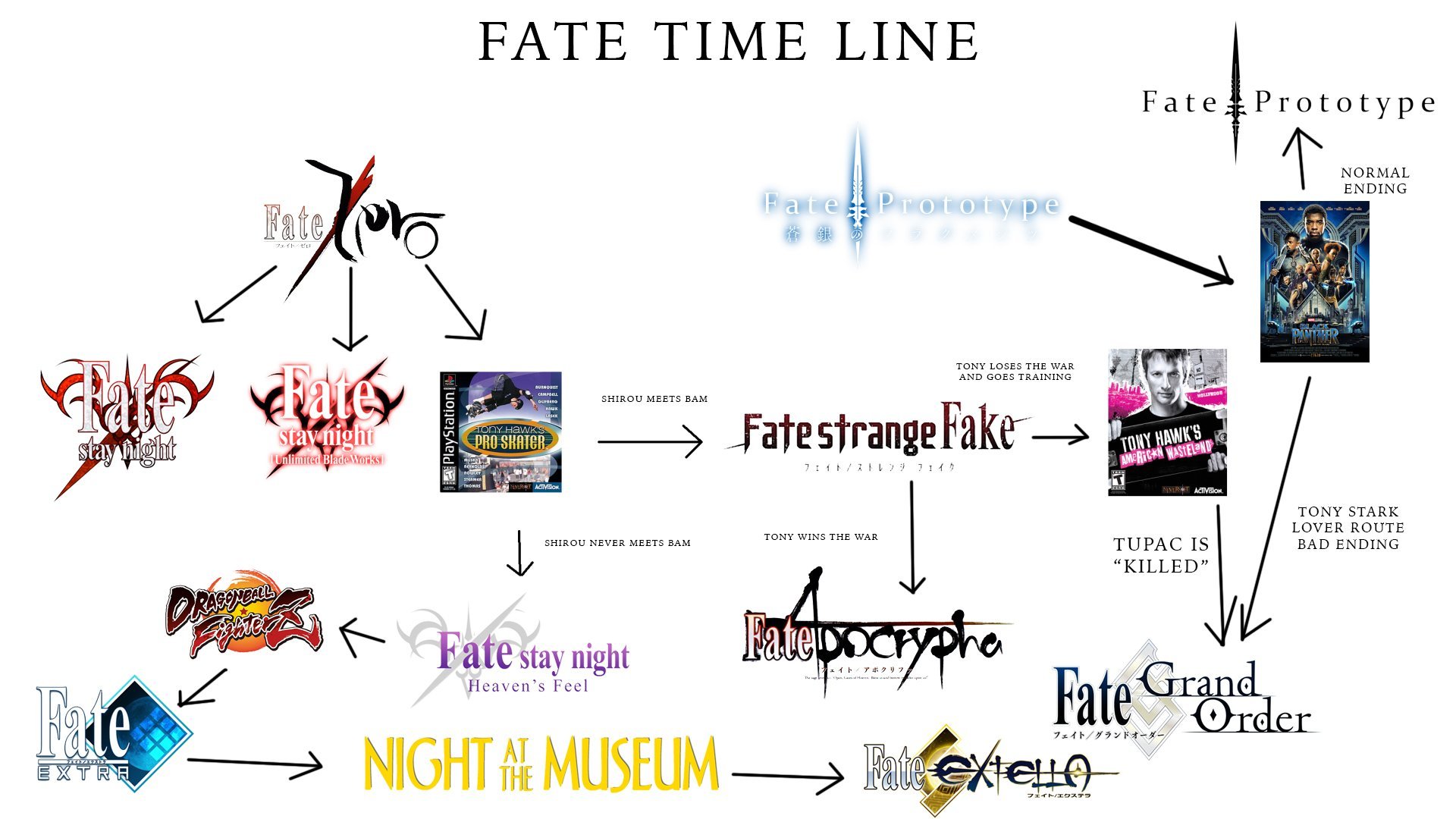 This is the basic and original path for novices who want to get started with the Fate anime. Fate/Zero- Fate/Stay Night Unlimited- Fate/Stay Night Fate/stay the night – Blade Works, if you want to watch the complete series in a short amount of time, Heaven’s Feel is the best option. You may view the side stories or a spin-off whenever you like.

Unbeknownst to the world at large, the Chaldea Security Organization relies on the analysis of various experts to determine potential extinction events to threaten mankind. Thankfully, their initial 2015 forecast predicts safety for the next century. However, the verdict suddenly announces the end of the world in 2016. With no apparent cause, Chaldea only knows of a link – the events of 2004’s Fifth Holy Grail War, the setting of Fate/stay night.

In turn, Chaldea has announced a Grand Order: to change the past and restore the future. To do this, protagonist Fujimaru Ritsuka – a new Chaldea recruit – and the mysterious Mash Kyrielight need to go back in time.

Fans of the Fate franchise would fondly remember Grand Order as the hit gacha game – with a gripping narrative despite its mobile nature. This movie adapts the prologue of the game’s “Observer on Timeless Temple” storyline.

In What Order Should I Watch The Fate Anime Series

How to Watch The Fate Series

All other Fate series are in similar Universes that diverged from Fate/Stay Night at some point so you can watch them in any order you want.

Some of the ones worth watching:

The Fate Series: A Quick Guide To Watching The Anime

The Fate franchise has always been a tough one to get into due to its sheer size and varying series quality. This guide makes it simple for newcomers.

The Fate franchise exploded onto the anime scene in the last decade after Ufotable’s adaptation of Gen Urobuchi and Takeshi Takeuchi’s light novel, Fate/Zero in 2011. Not long after that, the Fate anime series experienced an enormous boom that spawned many, many sequels and multiple spinoffs. However, due to this very phenomenon, the Fate series has become one that is overwhelming for newcomers.

The Fate series can be tricky to begin to navigate without any prior information however, with the right information it’s actually more straightforward than it may seem — as this guide will demonstrate. The biggest source of confusion in the series — and it has many — mainly stems from its first installment being a terrible adaptation. However, there’s more than one method for newcomers to dive into this immensely popular series.

Related: People Die If They Are Killed: The Most Infamous Bad Anime Fansubs

How Can I Watch Fate Without An Internet Connection

It is simple to watch an anime offline. One only needs a subscription to one of the official streaming services in order to watch since the Fate anime series and films are available on all of them.

Due to its existing availability, Amazon Video subscribers can download and view it from anywhere and at any time.

People who have a Funimation subscription can also download the movies on iOS and Android devices if they have a Premium Plus membership and use Premium Plus Ultra .

The offline download option is only accessible to subscribers of the No Ads Plan, which costs $11.99 per month rather than the monthly subscription of $5.99.

Other Media: No Particular Order

Phew! Finally, the Fate Franchise is sorted. We also sorted the Monogatari series watch order. Its definitely easier than this one. Hope we could help you appreciate the Fate series. Keep an eye out for more Guides and How to watch articles from Animehunch. Till then, mata ne ^-^

Releasing Order To Watch The Series 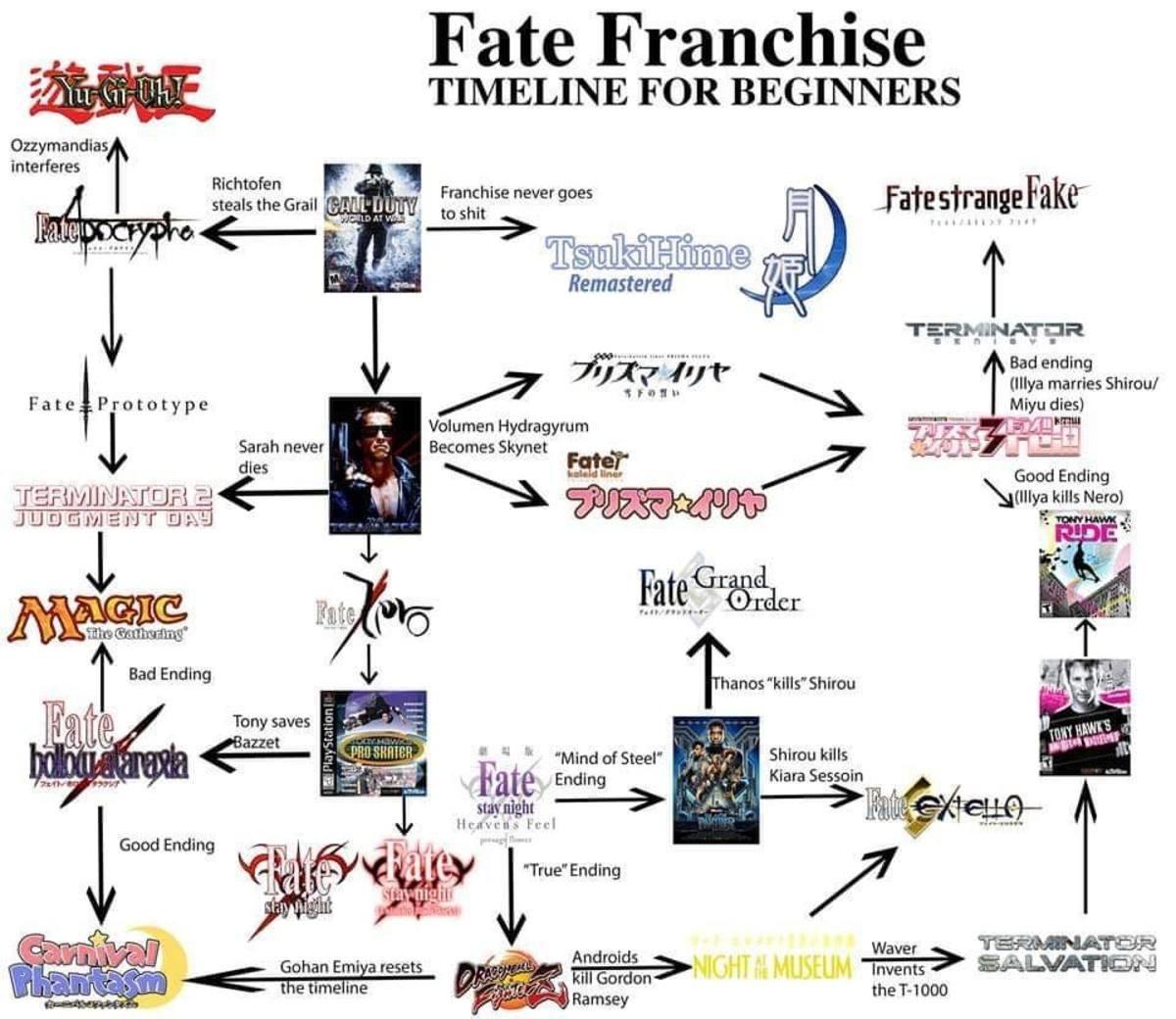 You May Like: How To Draw Anime Little Girl

In Ritsuka and Mash’s adventures to repair the world’s timeline and prevent Earth’s destruction, they stumble upon one final Singularity to fix. Surprisingly, their journey ends when the world is about to end, in 2016. Ritsuka and Mash need to stop Solomon’s plans once and for all.

This upcoming film is slated for a July 30, 2021 release. As with the other Grand Order media, this story adapts a chapter of tis “Observer on Timeless Temple” storyline. In turn, fans would immediately realize that this film covers the Solomon Singularity, the final chapter of said storyline.

The best way to maximize your Fate series experience is to watch it as the Studios intended.

The very first Fate series of 2006 adapted the Saber route. But instead of solely focusing on saber route, it tried to be all inclusive, and added major plot points of Rin and Sakura too.

It is based on the Unlimited Blade Works route of the game Fate/stay night focusing mainly on Rin Tohsaka, which assumes youve already played Fate, with even more plot twists .

It is based on the Heavens Feel route, the final route, and the darkest one of the game Fate/stay night, which focuses on Sakura.

You May Like: When Will The God Of Highschool Anime Come Out

Nothing turns anime fans off more than a long-running anime with a confusing watch order. Fate series is such an anime that may confuse you with the order youre supposed to watch it. But its just too good to ignore!

Fate Series tells us the story of the Great Holy Grail War between certain families that fight with each other by summoning great Historical Warriors from different eras to fight by their side. The ones to win the Holy Grail War shall get their wishes granted.

In Ritsuka and Mash’s adventures to repair the world’s timeline and prevent Earth’s destruction, they stumble upon one final Singularity to fix. Surprisingly, their journey ends when the world is about to end, in 2016. Ritsuka and Mash need to stop Solomon’s plans once and for all.

This upcoming film is slated for a July 30, 2021 release. As with the other Grand Order media, this story adapts a chapter of the “Observer on Timeless Temple” storyline. This film covers the Solomon Singularity, the final chapter of said storyline.

Why Watch It? As the name implies, Grand Temple of Time: Solomon showcases the final storyline available in the Grand Order game so far. As this film reveals Solomon as the antagonist of the current storyline, some fans may be afraid that this release will be skipping quite a ton of build-up for this grand reveal. However, Grand Temple of Time: Solomon compensates for this through compelling storytelling and quite a captivating take on the game’s final chapter.

Who Are The 7 Deadly Sins Anime

What Anime Hair Color Would You Have

Who Is The Hottest Anime Character

Is Chainsaw Man Getting An Anime

How Many People Watch Anime In The World

Where To Buy Anime Figures